It's true, I have tonnes of them, sparkley, flowery, vintage, modern, handmade, stitched, wooden. Love them.
I made some for the brooch swap, back here. I made some more, for friends and family, now I've made some more... 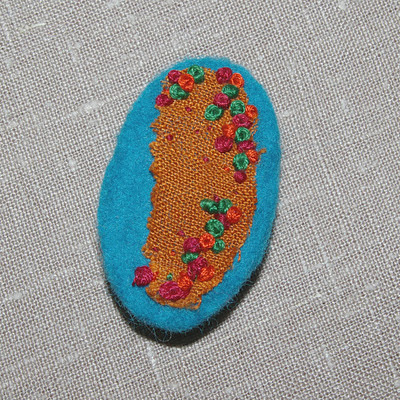 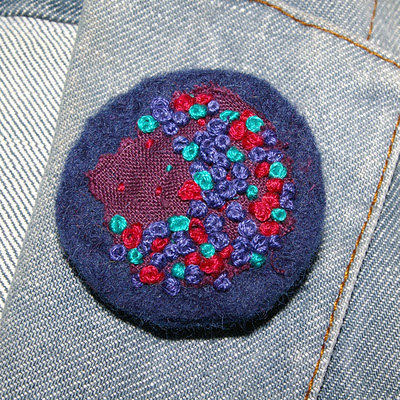 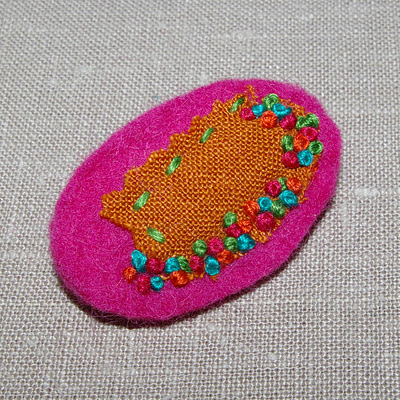 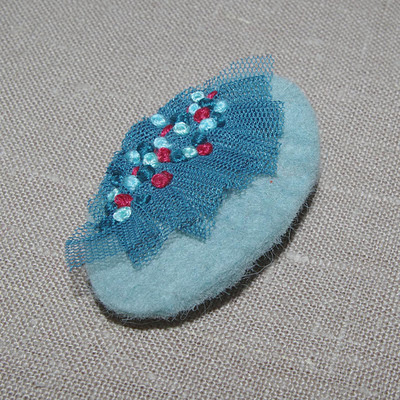 This lot actually made it into my shop.
I have so much to tell, but I seem to have fallen out of the blogging habit, hoping I'll find my groove again soon.
Linking up with more creative spaces, so much Christmas stuff over there, damn I'm behind!
Posted by Colette at 22:00 9 comments:

Email ThisBlogThis!Share to TwitterShare to FacebookShare to Pinterest
Labels: made for you, my creative space, sewing

portraits on the tube

This story begins in 1996. On a tube journey home from work I was, as usual engrossed in a good book. As I went to get off at my stop a guy persistently pushed something into my hand, I snarled a little but took it from him.
Once I was off the tube I looked at what he'd given me. It was a sketch, of me. I did of course want to get back on a talk to him, but the doors closed and he was gone. If I remember correctly he had long dreadlocks and a calm and friendly demeanour. 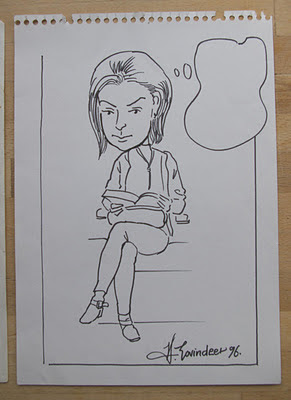 Many years later Mr and I were going through some stuff and I came across a portrait of him too. His was done in 1988, a few years before we met. Mr remembers the chap and had noticed that he was watching him and thought he was writing something down, the guy handed the picture to him before he got off the tube. 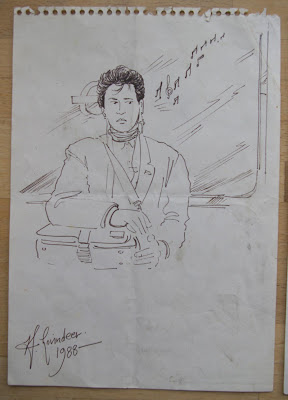 For years I have wondered about this man, does he still do this, does he do it all the time, who is he? Today I asked the question and sent an e-mail to Robert Elms on his BBC London radio show, if you've ever lived or worked in London you might of heard his show, on a Wednesday there is a Notes and Queries slot, you ring in with a question about London, however obscure and someone answers it. 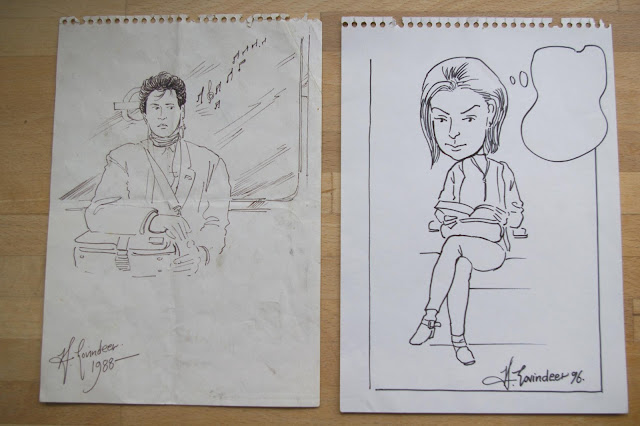 I thought we would get some answers, a few people rang in who had also had their portrait drawn but not that many and nothing about the guy himself. So I'm asking you! If you have ever visited, worked in or lived in London were you sketched by a black guy, whose name is either H or A Govindeer? 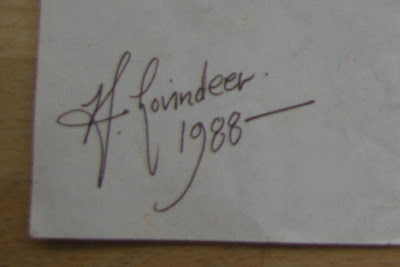 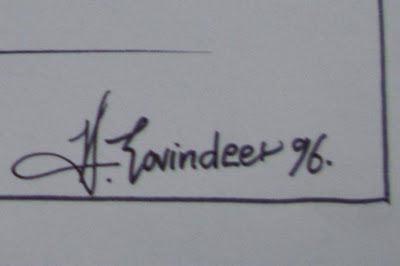 It would be fantastic to get a collection of photos of his work together, if you have a portrait of yourself send me a picture, tell me your story. Don't worry if you don't blog I will write a post and put it up on here. Ask your friends, maybe they have one lurking in a draw somewhere too. And if you know the man himself, even better!


E-mail me - colette (dot) moscrop (at) ntlworld (dot) com
You can listen again to the show here, (Mr is on just after 1pm) this is available for the next 7 days or see the story on facebook here.
I love these pictures, I have been saying for ages we should get them framed and on the wall. Now seems like the perfect time.
Posted by Colette at 22:07 10 comments:

Email ThisBlogThis!Share to TwitterShare to FacebookShare to Pinterest
Labels: govindeer, London, portraits on the tube

These have been in my head for far too long. 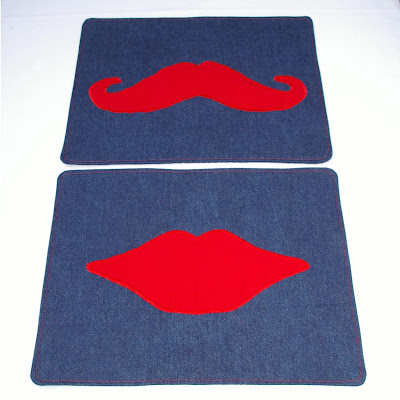 It's nice when they turn out just right isn't it? 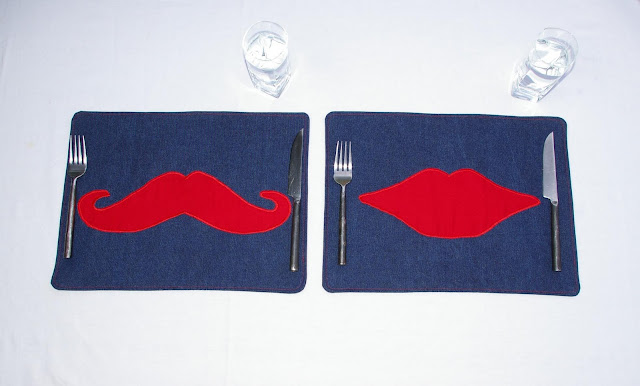 Inspired by these, from last year. I have many other versions whirling around, I'll get there. 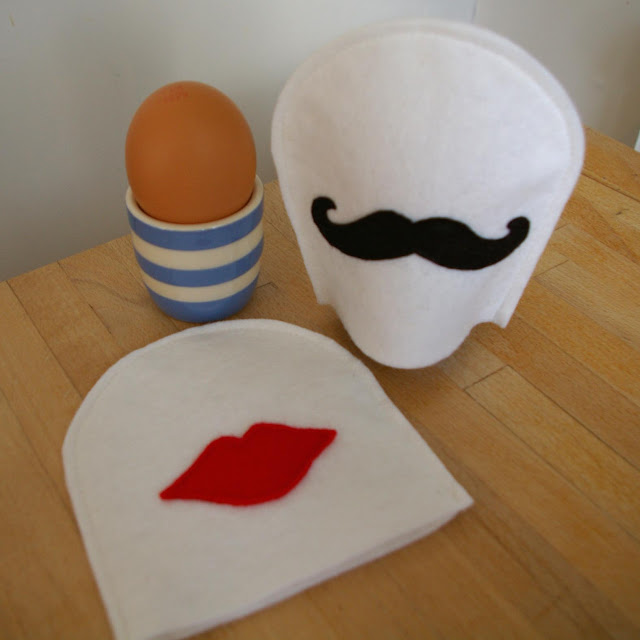 They are in my shop, if you're already thinking of Christmas.
What's in your creative space?
Posted by Colette at 21:21 5 comments:

Email ThisBlogThis!Share to TwitterShare to FacebookShare to Pinterest
Labels: made for you, my creative space, sewing

Little Missy is getting big

I've been a little preoccupied lately. Someone small turned four at the weekend and I very easily slipped into present making and party planning and stayed away from the world of blogging for what seems like forever. Hello again, it's nice to be back! 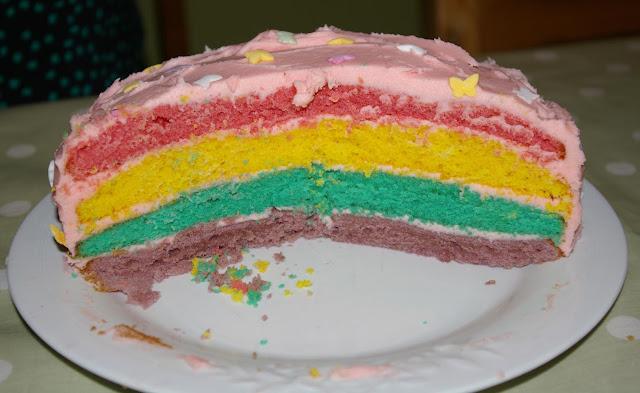 I had a go at a rainbow cake, I've seen them all over blogland and thought I'd have a go, a layer for each year. I used gel food colourings as many people suggested for a more intense colour, I was pleasantly surprised when I cut into it, as it had seemed a little dull when each layer came out of the oven. 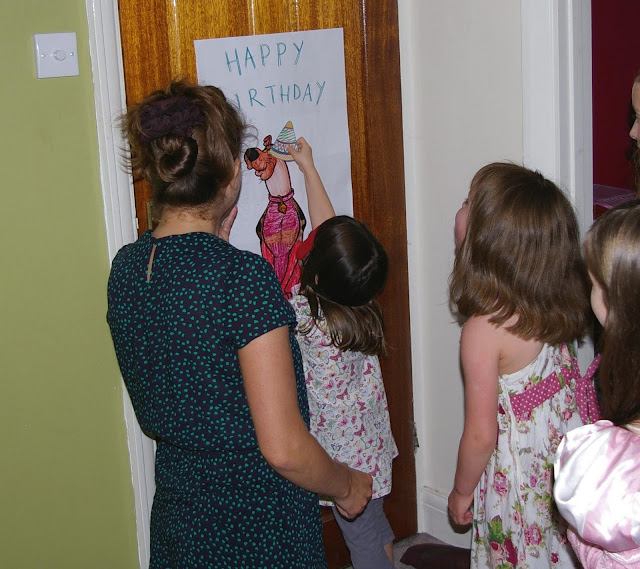 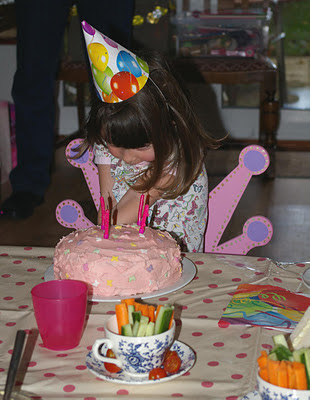 All of my designs are copyright protected.

If you want to use any images or content from this blog please ask first, thanks.